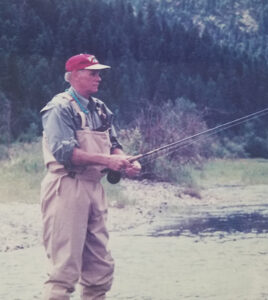 It is with regret we announce the passing of Richard John Barrett, age 79, of Fayetteville, TN. Rich was born on July 14, 1942, in Philadelphia, PA to the late Mortiner and Lorna Cabe Kahn. Mr. Barrett passed away on November 19, 2021 at Lincoln Manor, surrounded by his loving family.

Rich attended Ashville, NC City Schools and was a 1964 graduate of the University of North Carolina at Chapel Hill, with a major in economics and history. He was a Lt. Commander and pilot for the US Navy, and he served in Vietnam. Rich also flew helicopter no. 64 on the recovery of astronauts in the Apollo 11 mission. His job was to drop the swimmers after the module landed. Mr. Barrett also participated in the recovery of Apollo 8 and Apollo 10. After his military career, Rich was the owner and operator of Network Industries in Fayetteville, TN, and was a member of the Fayetteville First United Methodist Church.

A memorial service will be held at 2 PM on Sunday, November 21, 2021 at Higgins Funeral Home with Bro. Ronnie Thomas and Ray Fraley officiating.  Visitation with the family will be from 1 PM until 2 PM at Higgins.

Higgins Funeral Home is honored to be serving the family of Mr. Richard John Barrett.

We will have the family in our thoughts and prayers during this sad time.

Mr. Barrett was a very sweet funny outgoing man we all staff at work loved taking care of him we all had our laughs with him mr.barrett you sure will be missed Im going to miss our laughs and talks at work the good lord sure gained another sweet angel 😇

As Chief Seattle said,” THERE IS NO DEATH, ONLY A CHANGE OF WORLDS.” SEMPER FORTIS RIP Dear Brother! John Bruce Barrett SEMPER FI

Our sincere condolences to the family

May his memory be a blessing!!! Rest In Peace my dear cousin!!! I will so miss our phone conversations – sharing family stories – and family photos!!!! Richard was a gentleman, a true American who served our Country with distinction!!! You left this world a better place because of your contributions and service to so many. God Bless – and let eternal light shine upon you!

Dear Vicki and family.
I love the picture you shared. He looks like I remember him in his younger years. Sorry distance and age kept us from visiting. I have loving memories of Ritchie. Bill and Granny Mae. I wish you well and happy memories during this hard time. He was a great person.
Ann Cody Warren

Brother i will never forget when you and Vicki came to visit us in Oregon the great pacific north west. We had a blast floating down the Rouge River and all of the BS we all did and Treavor helped row us down the River. We will never forget Brother 🙏 💔 ♥