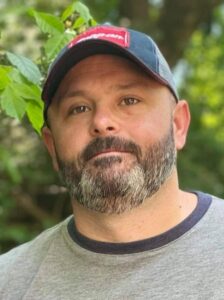 It is with great sorrow, yet with joy, that we announce the passing of Mike Jay Barnes on January 9th, 2022.

Mike began his life in Davidson County, TN on July 11, 1981. He then migrated to good ole’ Lincoln County in adult years where he married and has been raising three amazing children.

Sadly, Mike lost his fight with pancreatic cancer after a very long and hard fight. However, we can rejoice in the fact that Mike had a Savior in Jesus and is now in the presence of our Father in Heaven.

Mike served his community in many ways throughout his short life – as a mechanic for the city and as a corrections officer for the county. He lived to protect his family as well as anyone with whom he came in contact. He also served by working for Lincare and TN Brace & Medical, providing equipment for people with home health needs. Mike served in multitudinous other ways, but no matter what he did—it’s certain he worked with a huge smile on his face. No matter the job or circumstance, Mike always put his family and the well-being of his fellow neighbor first. If Mike accomplished anything in this life, it was putting others before himself. He is the true definition of a good man who would literally give the shirt off his back for anyone, while saying, “Dude, it’s not even a big deal.”

Please join us in celebrating the life of Mike Barnes while bringing awareness to the disease (Pancreatic Cancer) that took him from us way too soon.

Memorial donations may be made to:

He was a good man. I’ve known him since we were teenagers. Always a friendly person.

Tina so sorry for your loss. Praying for you and your family now and in the days and weeks ahead for comfort and peace.

I am. so very sorry to hear of Mike’s passing .I worked with him at the Sheriff’sDept.I know he will be missed by so many.Prayers to each of his family members. May God wrap his arms around each of you during this difficult time..

We so sorry for your loss prayers for you & your family ❤🙏❤ Love, Lachon & Lavon ( Tweety )

Tina, we are so sorry for this irreparable loss. May he find peace. I hope the almighty grants you and your family strength in this difficult time. You all will always be in our prayers!