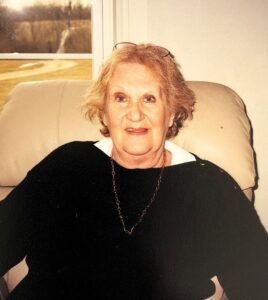 Lilah was born in Glasgow, Scotland to Barnet Merrens z’’l and Esther Caplan Merrens z’’l- she was the eldest of five children. In her twenties she moved to England where she met and married Leonard Raznick z’’l with whom she raised two daughters. She was passionate about acting, dancing, and singing, and pursued the arts in any way she could. Lilah was an incredible hostess, and her warm nature and charisma will be remembered by all of the guests fortunate enough to be invited to the events of her life.

In 1988, Lilah became Nana. She moved to the U.S. in 1992 to be close to her new grandchildren and her elder daughter. She spent the last 30 years of her life playing the role of biggest cheerleader for each and every one of her grandchildren – in the USA and Europe, and great grandchildren here in the USA

She is preceded in death by her parents, her sisters Maureen and Iris, and her brother Joe. She is survived and missed by her brother, Eddie Merrens, her daughters, Elizabeth Phillips (and son-in-law Charles Phillips) and Deborah Pacht, (and son-in law Stephen Pacht), a great number of beloved nieces and nephews, by her grandchildren Sarah, Zachary, Benjamin, Hadassah, Samuel, Hannah, Gabrielle, Jessica, and by her great grand-children Eliana, and Miriam.

May her memory be forever a blessing.

Higgins Funeral Home is honored to be serving the family of Ms. Lilah Raznick.