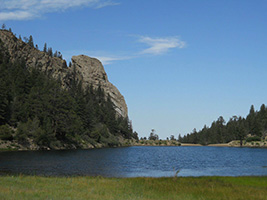 John Lloyd Shutt, at 99 years of age, passed away August 3, 2017 in Fayetteville.  A native of Nashville, he was the son of the late Henry Loyd and Johnetta Davis Shutt. He graduated from Davidson County Central High School and Peabody College for Teachers.

During World War II, he received Naval Reserve Officer training at Notre Dame University.  As an officer with the Navy Seals, he received two Bronze Stars for his service in the invasions of Italy and France. As a Lieutenant he served in the Pacific Theater as Executive Officer of the naval ship LST-1042. After the war, he married Margaret Harris of Howell, Tennessee, whom he had met at Peabody.

He was an Eagle Scout, and he later went into professional scouting. His scouting career took the family to Florida, Georgia, North Carolina, New Jersey, and New Mexico. He was on the National Scout Staff, and retired as the General Manager of Philmont Scout Ranch in Cimarron, New Mexico.

After retirement, he and Margaret returned to their native Tennessee and made their home in Fayetteville. He was an elder in the First Presbyterian Church, and was instrumental in starting the preschool program there. He was a President of Rotary and a Paul Harris Fellow.

He is survived by his wife, Margaret, son Jack and wife Gail, a granddaughter, Rachel Harwell and husband Lance, and two great-grandchildren, Will and Maci Harwell – all living in Lincoln County. Burial was in Rose Hill Cemetery, Fayetteville, with Bro. Harold Dawkins officiating. Higgins Funeral Home is honored to serve the family of John Lloyd Shutt.

I came to know Mr. Shutt while he resided at Southern Manor. He was a very quiet man who spoke very few words. He was very pleasant when you spoke to him. Fly high and go rest on that mountain. It was my pleasure to meet him. To the family my sincere prayers and condolences to you.

Gail and Family,
My thoughts and prayers are with you all.
Judy Stafford

Mr. Shutt was like a second father to me when he, Mrs. Shutt, and my high school bosom buddy Jack lived three houses away from us in East Brunswick, NJ. With Jack being an only child, they took me under their wing and always welcomed me in their home. I learned many things from Mr. Shutt, who, in addition to everything written in his obituary, was a master finish carpenter who built beautiful furniture and many other useful items. He even had a drill that drilled square holes! 🙂 He was a great problem solver, whose reaction to every issue was a calm “now what can we do about that?” He helped Jack and me with numerous school projects and always encouraged us to do our best. But most of all I remember the fun Jack and I had trying desperately to beat him at ping-pong, which I probably only did once out of every 100 games or so. Whenever I got ahead he’d start trash talking and playing mind games that totally destroyed me, all three of us laughing all the way. But a kinder, gentler man you couldn’t hope to meet.

Jack, Gary and I send our sympathy to you in your loss. What a wonderful legacy and long life your dad left. We have you in our thoughts and prayers in the days ahead. Gary and Brenda

Jack, I have known your parents through the family tree since the early 1990’s. I remember fondly my first conversation with your mom, then your dad. They both are wonderful people. He lived a good life and will be greatly missed. You are all in my prayers.
Peggy Coleman

Sorry for your loss prayers for the family

My deepest sympathy is extended to the family. I remember Mr. John and Mrs. Margarett visiting the Howell USA Presbyterian Church with her mother Mrs. Eunice Harris.

Jack and Gail
So sorry for the loss of a good man. Thinking of you guys

To a life well lived and an example for us all ! Our sincerest condolences to Mrs. Shutt, Jack , Gail and family. Keeping you all in our hearts.

Gail & Family, I didn’t have the pleasure of knowing Mr. Shutt but he has a remarkable obituary and obviously lived an amazing life full of love & joy Sending love & prayers!