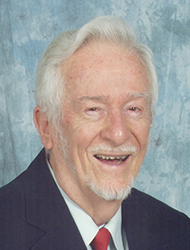 John David Harper, Jr (Dave) died Tuesday, January 21, 2014 in Fayetteville TN. Dave was born in Etowah TN in 1926. He served as a Radioman in the Navy toward the end of WW2 aboard the USS Enterprise. After his discharge in 1946 he attended Tennessee Tech graduating in 1950 with a BS in Electrical Engineering. His first civilian job was at Ft Monmouth NJ where he met and married Carolyn Cooper in May 1952. Dave transferred to Redstone Arsenal near Huntsville AL in 1954. He worked on guidance and control electronics for the Redstone, Pershing, Jupiter and Saturn rockets. He transferred to NASA in 1960 where he contributed to the Spacelab, Apollo and Shuttle programs including work on the “Moon Buggy” used in Apollo missions. In 1970 he transitioned to the Hubble Space and X-Ray Telescope programs. He holds two U.S. patents and received numerous accolades for his contributions to the space program. He retired from NASA in 1991 after 43 years of government service. Dave held an Advanced Class Amateur Radio License (W4NIQ) and was a member of the American Radio Relay League. He was instrumental in setting up the first two-meter radio repeater in Lincoln County. He was an active contributor and board member for Junior’s House, a Child Advocacy Center in Fayetteville. Dave is survived by his four children: Teresa Cissell of Brentwood TN, Daniel Harper of Madison AL, John D. Harper, III of Fayetteville, TN and Carolyn K Irish; six grandchildren: Kristen Hayden, Kimberly Harper, Jonathan Harper, Audrey Harper, Earl Irish, and Charles Irish; and one great-grandson Myles Hayden.

A memorial service will be held at 2:00pm, Saturday, February 1st at First Presbyterian Church at 101 Mulberry Ave. in Fayetteville. Dave and his family prefer that donations to either the American Cancer Society or Middle TN chapter of the Alzheimer’s Assn. be made in lieu of flowers.

So sorry to learn of Dave’s passing. He will be missed by so many. May God heal your broken hearts.
In Christian Love,
Peggy G. Bevels

I’m going to miss you Dave. You are now with my Sister Carolyn, who I miss so much. Say Hi to my Bernie for me. My prayers are with the Harper Family. RIP .

Dear Terry, I am so sorry for your loss. You and your family are in my thoughts and prayers.

Let the circle be unbroken…I will pray for your heart”s comfort and reassurance during this period of transition for your family.

Terry and family,
Your dad was a wonderful man. He and Mrs. Harper are together, again. Keeping the family in my thoughts and prayers.