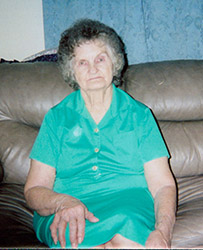 Mrs. Thompson was a native of Lincoln County, TN, the daughter of the late Ed Lee and Gracie Lee Dollar McBay. She was a homemaker and a member of the West End Baptist Church.

Visitation with the family will be Friday evening from 5 until 8 p.m. at Higgins Funeral Home.

So sorry for your loss, aunt Jewel will be surly missed. Haven’t seen you all in many years,think Wilson is about my age . God Bless ,Phillip Manley

Sorry for your loss Stephanie!

So sorry for the loss of Jeweldean, may you all find comfort and peace in knowing that she is pain free and celebrating with family members in the streets of Heaven.

Mr. Houston, we are sorry for the loss of your Sister. Our prayers and thoughts are with your family at this time

I am so very sorry to know about your great loss , words can not express the heartache we feel for the family our deepest condolences are with the Thompson family I pray to God to give the family peace at this time of sorrow may God bless the family endow them with love & care at this time Love Lavon & Darryl