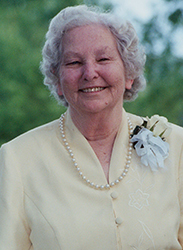 Funeral service for Mrs. Hazel Williams King, age 94, of Flintville, TN, will be conducted at 2 PM on Friday, November 1, 2019, at Higgins Funeral Home with Bro. Johnny Clardy and Bro. Rickey Clemons officiating. Burial will follow next to her husband, Willie B. King, in Lincoln Cemetery. Visitation with the family will be held on Friday beginning at 12 PM until time of service at 2 PM at Higgins.

Hazel was born on June 13, 1925 in Birmingham, AL to the late William A. and Martha Gonder Williams. She was a member of Pleasant Grove Primitive Baptist Church. Mrs. King passed away on October 30, 2019 at her residence.

Higgins Funeral Home is honored to be serving the family of Mrs. Hazel Williams King.

sorry to hear of your loss

Never a sweeter lady to have graced this earth. Our sympathy to the family of Mrs. King.

One of the sweetest ladies I have ever known. Loved Aunt Hazel dearly! Prayers for the family.

To the King family.
So sorry to hear about your sweet precious mother. She always had such a sweet smile everytime you saw her. May God wrap his arms around all of you and comfort you. She was so blessed to have a family who loved and cared for her the way you did. She is now home with her LORD JESUS CHRIST. GOD BLESS EACH AND EVERYONE OF YOU. MY PRAYERS ARE WITH YOU!!

I will miss Hazel,. My heart goes out the my family during this time of loss. I pray that God will strengthen and draw you closer to Him thru this time. I won’t be able to make it, but my heart is with yall.

Thank you for remembering Mama. We will miss her so much. Love Charlotte

We know the pain of losing our mothers. We are so sorry you have lost yours. The photo you provided is beautiful, and seeing her is like looking into your face. Such a resemblance. Buddy and I send our sympathy and prayers for your family as you say goodbye to her. Much love.

Thank you Sandra for your kindness. We will miss her so much.