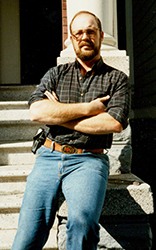 Mr. Hastings was a native of Lincoln County, TN, the son of the late George Edward and Barbara Sanford Hastings, Sr. He was a foreman and truck driver for Childress Concrete and a member of the Church of Christ.

Visitation with the family will be Tuesday, November 29, 2016 from 5 until 8 p.m. at Higgins Funeral Home.

In lieu of flowers, memorials may be made to the Washington Street Church of Christ Honduras Mission Fund.

Adrienne, Joe, and Cheryl,
So sorry to hear this news. My prayer for peace is with you all.

We are so sorry for your loss! Praying for peace and comfort that surpasses all understanding!

Adrienne so sorry for your loss. May God be with you and all the family in your time of sorrow

Our condolences on the passing of your father, Adrienne. May GOD cradle all of your family tightly to his bosom during this time of greatest need.

Praying for your family. May our God of comfort and peace carry you thru this difficult time. Love you guys,
Malcolm and Beth

Adrienne,So sorry to hear about your dad.May God be with you in this time of sorrow.

We ar so sorry to hear of your loss, Alicia and Travis and to your entire family. We have loved your family for years and have seen such great effort to take care of your Dad. Bless you.

Girls i am so sorry for the loss of your Dad…….Cheryl i am sorry….I pray each of you will find comfort in sweet memories that have been made over the years.

We are So Sorry for your loss. This man had such a devoted caring Family .May God wrap his arms around each of you and Comfort you at this difficult time. You all are in Our Prayers. Brenda ,Joe Burns and Mattie Mae

My thoughts and prayers are with your family. Sorry for your loss

I met Eddie years ago when the girls were playing basketball at the old Petersburg School. I always enjoyed being around him. He was a good guy and I really thought a lot of him. I’m really sorry that he had to leave his family at such a young age. May God keep you all in his care.