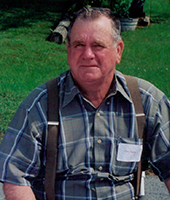 In lieu of flowers, memorials may be made to the American Heart Association 1818 Patterson Street Nashville, TN 37203.

Mr. Don was a very good friend to my daddy, Joe Sandlin. They were old buddies from Harms. I know he will be missed.

My sincere sympathy at the loss of Mr. Ables.

So sorry for your loss praying you find comfort and peace during this difficult time with memories of your loved one tucked safely away in your heart.

Don was a classmate of mine at Central and at MTSC. More important however, he was a friend. May you have memories that will last forever and find peace. Our prayers are with the family.

You and your family are in my thoughts, heart and prayers. My condolences on the passing of your father.

so sorry for your loss

My thoughts and prayers are with all the family. Don was a classmate of my brother, Richard, but also a good friend of mine. So sorry for your loss. I pray that the wonderful memories will help to make this loss easier to accept. Take care and God Bless.

Dixie Lee, You & your family have my sincere sympathy. Carolyn Stevenson Thompson

MAURINE AND FAMILY MAY GODS BLESSINGS WITH EACH OF YOU IN THE LOSS OF YOUR LOVE ONE.WE HAVE YOU IN OUR PRAYERS. Don was A GOOD FRIEND .

Maurine and family May GODS BLESSINGS BE WITH EACH OF YOU IN THE LOSS OF YOUR LOVE ONE WE HAVE YOU IN OUR PRAYERS . DON WAS A GOOD FRIEND