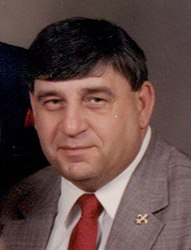 Graveside funeral service for Mr. Dennis R. “Danny” Sapach, age 76, of Fayetteville, TN, will be conducted at 3:30 PM on Saturday, February 16, 2019, at Stewart Cemetery with Bro. Paul Clayton officiating. Visitation with the family will be Saturday at 1 PM until 3 PM. Higgins Funeral Home is honored to be serving the family of Mr. Sapach.

Mr. Sapach was born on February 20, 1942 in Chicago, IL to the late John and Anna Boyko Sapach. He served in the United States Air Force and retired from the United State Navy. He was a graduate of Motlow State Community College and earned a bachelor’s degree from the University of Alabama in Huntsville. He later worked as the Vice President and General Manager for Lampi Corp and was a member of Park City Church of Christ. Mr. Sapach passed away in February 14, 2019 at Harton Regional Medical Center.

Daniel I am so very sorry for the loss of your dad. Also to Jeff, Suzanne, Miss Sue and other family members, thoughts and prayers go out to you all. I remember being at your house one day and hearing Mr. Danny playing the piano or organ. He was very talented. So sad for you all.

So sorry to hear of Danny’s death. prayers and thoughts of all the family in this time of sorrow.

Daniel and Jeff, I am sorry for the loss of your father. Sincerely Forrest Keith

My heart breaks for you, if you need me for anything call and let me know.

Sapach Family:
May you all find solace and comfort from God during this time. Mr. Danny was always a joy to share stories with when he would visit Generations. He will be missed. Know our prayers will be with you as you make this journey.
Cheryl Hobbs; Generations

Sue and family, so sorry to learn of Danny’s passing. May you find peace and comfort in the Lord and from Christian friends at this time. Our love in Him, Wanda and Bob Williams

Richard, Suzanne and girls,
So sorry for your loss and prayers for you at this time.
Lenace Hyde Vaughn

So sorry for you lost you are in my prays