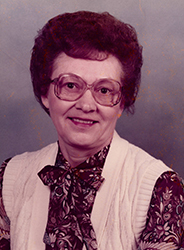 Alline Deal Groce, age 89, of Fayetteville, TN passed away January 11, 2019, after a brief illness. She was a native of Moore County and the daughter of the late Oscar Andrew & Suzie Fanning Deal. She was a faithful wife to her husband, J.T. Groce, who passed away in 2002, and a good mother to her two sons. She was a member at the Northside Church of Christ.

Funeral services will be conducted by Ronnie Thomas at Higgins Funeral Home 11 am on Monday, January 14, 2019. Visitation will be from 10 am to 11 am prior to the funeral on Monday. Internment will be at Booneville Cemetery.

In lieu of flowers, memorials may be made to the Northside Church of Christ, 161 Shelbyville Hwy., Fayetteville, TN 37334. Higgins Funeral Home is in charge of the arrangements.

Sorry for your loss!

So sorry, I have heard my Mom speak of her. My Mom & Mrs. Christine Ashby we’re friends in Florida

I just found out about Mrs Alline’s passing. I am so sorry I missed her visitation. Hopefully I can see you all before you leave town.